Book Review by Roberta Cory: “The Death of Democracy: Hitler’s Rise to Power and the Downfall of the Weimar Republic” by Benjamin Carter Hett 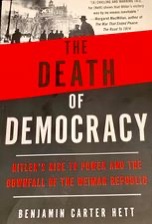 First, I am sharing this book review just before New Year’s Day when so many of us are struggling to be positive about 2021. While friends are trying to party any way they can under lockdown, and beat back the blues, I am discussing a book about the last days in Germany, when a dictatorship could have been avoided, and was not. The latest news is that Trump is provoking Iran, which could lead to war, providing an excuse for Trump to declare a state of emergency.

Anything important that happens south of our border affects Canada too. More importantly, Canadians should ask themselves if the “free world” is strong enough to withstand the stresses we will face in 2021.

Four weeks after Hitler was appointed Chancellor of Germany, the Reichstag (parliament) burned. That enabled the “Reichstag Fire Decree” which suspended the civil liberties guaranteed in the German constitution, legalizing imprisonment without trial, abolishing freedom of speech, and gave the Reich government the power to replace any existing administration that failed to accomplish security and order.
Hett asks why the Germans supported Hitler, rather than rising up and resisting totalitarianism, and his answer is that they preferred conspiracy theories and lies to a rational factual reality. Hitler, who seemed to be a nobody (“He looked like a waiter in a railway station, people said, or a hairdresser.”), was a gifted actor who could use his voice, his eyes, his whole body, to seduce crowds and individuals. The Germans, in 1933, wanted to be seduced.
As Hett writes, “The Nazis would have been unthinkable without the First World War, and here, right at the beginning of the story, we see something else: the trauma of defeat left millions of Germans believing a particular narrative about the war not because it was demonstrably true, but because it was emotionally necessary.” MAGA – Make America Great Again – was used as Reagan’s campaign slogan, but its roots go back to Hitler’s “Make Germany great again,” the assumption being that Germany was great before the First World War and had been in decline ever since. Germans wanted solidarity: “unity or agreement of feeling or action, especially among individuals with a common interest; mutual support within a group.”
Although the Treaty of Versailles crippled Germany with debt, and the economic solution resulted in gross inflation, the constitution of 1919 created a state-of-the- art democracy. The Weimar Republic, under the leadership of Gustav Stresemann, began to participate in a proto–European Union. Trade agreements and membership in the League of Nations were efforts to prevent another war in Europe. Germany excelled in every field: scientific, business, culture and creativity, civil rights; and workers had won the eight hour day with full pay. Hett contributes to understanding the death of Weimar Democracy by finding the fractures along the tension lines that eventually turned into fissures. There were too many political parties and most of them had their own militia.
When the Reichstag was deadlocked and could not act, President Hindenburg and his conservatives ruled by executive decree. By 1930 there was a general distrust of “the system.” Germany was experiencing a spiritual malaise. People yearned for “solidarity.” Goebbels, Hitler’s propaganda minister, supplied the stories, costumes, lighting, and choreography for a myth of white supremacy.
2021 is coming in with a pandemic and an economic fallout that we cannot yet imagine. Out of control climate change has radicalized environmentalists, while a fundamentalist Christian faction waits for the second coming. Some of our most unstable people are vulnerable to conspiracy theories and dogmas, acting out with domestic terrorism. Already primed by years of sophisticated marketing campaigns, consumers are increasingly unable to separate stories and lies from reality. Non-governmental watchdog groups, independent journalists, and public broadcasting struggle for funding and attention.
“The Death of Democracy” is timely.
Roberta Cory
Posted by London Council of Canadians at 6:25 PM No comments: