"The Secret Vampire: Sucking the Lifeblood out of Canadian Cities" by Jennifer Chesnut 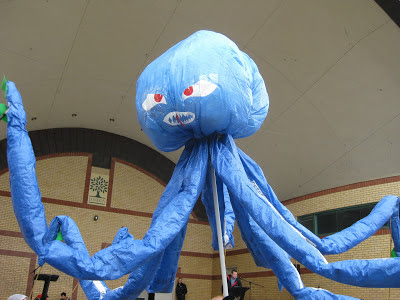 Posted by London Council of Canadians at 10:38 AM No comments:

"Harper gifts us with 99 lumps of coal." by Roberta Cory

Christmas is for children - trade deals are NOT!

T'was the night before Christmas and all through the house,
Not a creature was stirring not even a mouse;
The stockings were hung by the chimney with care,
In hopes that St. Nicholas soon would be there;
The mice were curled up all snug in their nests,
While visions of cookie crumbs danced in their heads;
Mum in her nightie and I in my cap,
Had just settled down for a long winter's nap,
When next to the chair there arose such a clatter,
I sprang from my bed to see what was the matter.
Away to the table I flew like a flash,
Uncovered my iPad and clicked on the hash.
The light from my iPad glowed chilly and white,
And I gasped when I saw it, a frightening sight;
For what to my wondering eyes was revealed,
But our PM in a sleigh with eight tiny trade deals.
He signed with a ball point so lively and quick,
I knew in a moment this wasn't St. Nick!!
More rapid than eagles his trade deals they came,
And he whistled while signing and called them by name:
"Now CETA*, now FIPA,* now TPP* and NAFTA*!
On Nexen,* on Suncor, on PERC* and CNOOC;*
To the the EU, to China, to Columbia and Nepal;
Now dash away! dash away! dash away all!!"
And then in a twinkling, I heard in the hall,
The scratching and chewing of something in the wall.
I opened the door and was looking around,
When out of a mouse hole Harper came with a bound.
He was dressed all in seal fur, from his head to his foot,
And his clothes were all tarnished with coal dust and soot.
A bundle of bags he had flung on his back,
And he looked like a peddler just opening his pack.
His dress shirt was ironed, his blue eyes …. they twinkled.
His skin was like plastic, his suit wasn't wrinkled.
His droll little month was drawn up like a bow,
And the sound of his voice was as cold as the snow.
He was smiling, and pleasant, and handsome to see,
And I laughed at the thought that he could hurt me.
A wink of his eye and a twist of his head,
Soon gave me to know I had nothing to dread;
He spoke not a word but went straight to his task,
Filling stockings with trade deals too secret to ask.
He hurried and did it with all of his power,
Changing our lives at the very last hour.
He ran to his sleigh, to his team gave a whistle,
And flew back to Ottawa like the down of a thistle.
But I heard him exclaim, ere he drove out of sight,
"I just sold off Canada, go to sleep, and good night.."