The following members of the Steering Committee for the London Chapter were elected at our AGM on November 25, 2013:

Roberta Cory, Chapter Chair:
Roberta joined the CoC in 2001 and was active on the Water Committee of the London Chapter. From 2005 to 2010 she was on the Board of the Victoria, BC Chapter as Membership Chair. She was instrumental in restarting the London Chapter in 2010 and has devoted a large portion of her life since then towards Trade Justice, Water, and Mining Justice issues.

Aldous Smith, Secretary:
Aldous became a Council of Canadians member in 2012. As well as attending rallies, writing letters and helping create advertising and C of C booths for various events, he has worked as the designated printer and editor for the London chapter. He has two Masters degrees from Western, and he is a published author and literary critic.

David Heap, Media & Communications Chair:
Associate professor (French & Linguistics) at Western and father of two, David has served in the past as Peace & Social Justice chair for the London Chapter of the Council of Canadians. He is also active locally with People for Peace London, and the Latin American Canadian Solidarity Association (LACASA), and nationally / internationally with the Canadian Boat to Gaza / Gaza's Ark campaign (endorsed by the Council of Canadians). He has often acted as media spokesperson for different causes, and has published widely on e.g. rabble.ca, among other places.

Posted by London Council of Canadians at 10:59 PM No comments: 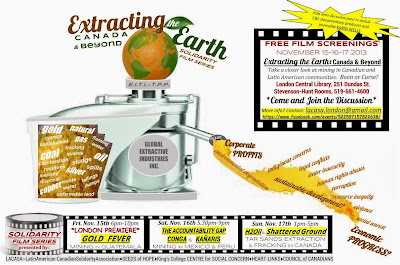 A weekend long film festival focusing on the role of Canadian extractive industries at home and abroad. Eye-opening documentaries; current, relevant and controversial issues. Panel discussions, refreshments, information tables.
Get informed, join the debate, get involved! We will be at the Stevenson-Hunt Rooms of the Central Library.

Extracting the Earth is a 3 day free film series that will examine the impact of Canadian extractive industries on the communities where they operate, here and in Latin America. Our intention is to educate and inform the public, as well as to foster discussion on the many aspects related to extraction such as: First Nations rights; environmental and health impacts on the affected communities; human and labour rights; social and economic aspects, including the corporate social responsibility of these multinational corporations. It will be the first time in London that a 3 day film festival is dedicated entirely to these topics.

• Introduction and analysis by Grahame Russell of Rights Action via Skype.
• London premiere of Gold Fever: feature film on the impact of open pit gold mining in Guatemala and the role of Canadian mining giant Goldcorp.

• Short film on the eviction of a Mayan peasant community in El Estor, Guatemala, and Defensora (trailer).
Presentation by professor Lorraine McNeil, Fanshawe College, about the pending court cases in Ontario against Hudbay Minerals, the company linked to the events depicted in the films.

• Accountability Gap: a short film on the conflict in Durango, Mexico, with Canadian mining company Excellon. Presentation by Esla Arismendi on the work done by the NGO ProDesc and the Steelworkers of Canada;
• In the Heart of Conga: feature film on the Conga gold mine in Cajamarca, Peru;

Discussion via Skype with Gustavo Gorretti, renowned Peruvian journalist, and the public.

• H2Oil: feature film on the impact of tar sands extraction on the Athabasca First Nations communities;
• Shattered Ground: feature film on hydraulic fracking in Canada and the US, narrated by David Suzuki.
Presentation on fracking by Gary Brown, environmentalist, and discussion with the public.

For more information, go to:
http://bit.ly/ETEfilmseries

Posted by London Council of Canadians at 11:49 AM No comments: