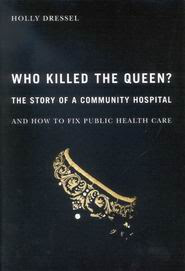 Holly Dressel, spoke on her new book: "Who Killed the Queen? The Story of a Community Hospital and How to Fix Public Health Care” on September 15, 2008 at the BCGEU Bldg., 2994 Douglas St. Dressel is a best-selling author generally known for work on environmental subjects and as a writer-researcher for television, radio and print for the last twenty-five years. She is the best-selling author, with David Suzuki, of "Good News for a Change: Hope for a Troubled Planet" and "From Naked Ape to Super-species: humanity and the global eco-crisis". Her talk was sponsored by the Victoria Chapter of the Council of Canadians, the South Island Health Coalition, and the BC Health Coalition.

From the publisher: “When Elections Canada conducted a 2004 federal election survey, they found that the number one issue for Canadians of all ages was health. With a new federal election recently announced, healthcare continues to be of the utmost priority. The Queen Elizabeth Hospital of Montreal, an exemplary Canadian community hospital that had been the site of many national and international medical firsts, was suddenly closed in the mid-1990s. It was not alone. Using the dramatic and entertaining 100-year history of the Queen Elizabeth as a base, Who Killed the Queen? investigates Canada's mass closures of hospitals and hospital beds between 1994 and 1998. The book shows that the resulting 20% loss of beds - a figure unparalleled in the history of any other industrialized country - continues to affect hospital and health care in every province. Holly Dressel offers strong evidence as to who and what was responsible for the closures and also provides well-supported, international assessments of the current quality of the Canadian health care system, arguing that it can not only be saved but strengthened. Who Killed the Queen? not only exposes the effect of internal bureaucratic and external economic pressures on public health care in Canada but also demonstrates the many ways in which this country’s medical care is exceptional and worthy of emulation. This discussion is relevant for all countries whose medical systems are under attack."

Last night, Holly gave us a brilliant and dynamic discussion of the disastrous state of hospitals and health care in Canada, and of the importance of keeping Canadian health care public and avoiding the pitfalls of privatization.

The worst period in the history of Canadian health care was 1994-95, during which hospitals were closed in every province, 57 hospitals in Saskatchewan alone. The question is why?

The answer, according to Dressel, stems from the IMF (International Monetary Fund) forcing Canada to make “structural adjustments”, resulting in the drastic cutting of federal transfers to the provinces. (The IMF dictated specific cuts to social programs.) Other countries have refused to cowtow to the demands and threats of the IMF, but Canada buckled under the pressure, and catastrophic destruction of the hospital care system then existing ensued. By slashing 20% of its hospital funding, less than $30 million was saved in the entire country, a paltry sum in view of the huge loss to health care in Canada.

As a result, Canadian hospitals converted to a bare bones business model of operation, which requires that beds be at least 90% full at all times. Therefore, in the event of a health crisis of any kind these hospitals are immediately overwhelmed.

In BC workers in the Hospital Employees Union were required to accept pay cuts averaging 40%. Nevertheless, in spite of all of the "austerity measures", wait times in Canada remain at par with the rest of the developed world, regardless of popular misconceptions to the contrary.

Privatization of health care, which is also dictated by the IMF, leads only to an increase in profits for the corporations involved, at the expense of universal access. The result is that even well-off people do not seek health care until their medical conditions are accute and severe, because they cannot afford expensive tests early on. Costs are therefore much greater, and death rates even for those undergoing treatment are increased.

For a prequel to the book, a 2006 article in Yes Magazine, click here.
Posted by London Council of Canadians at 7:25 PM No comments:

Written by The Grey Tiger

On Wednesday May 7 the Victoria Chapter of the Council of Canadians held its 16th Annual General Meeting. The AGM opened with a meet and greet and a silent auction at 5:30 p.m., followed by a potluck supper at 6:00 attended by about 50 enthusiasts. The short meeting included a new addition to the slate of the Board of Directors, complimenting the regulars who have made the Victoria Chapter rank among the most active in the country.

With a presence at the Moss Street Market on Saturday mornings during the summer, regular monthly Coffee Nights offering informational events to the public, promoting issues and causes close to the daily lives of Victorians, and sharing the leadership for the Greater Victoria Water Watch Coalition (GVWWC), as well as a variety of other activities, we keep a busy active profile. 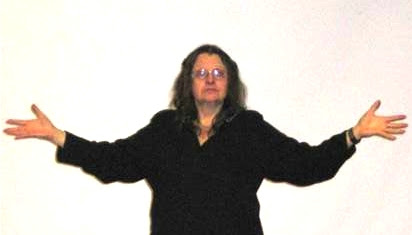 Ava Waxman, the Regional Representative from the B.C.-Yukon office, gave an animated talk on how well some of the C of C interventions have been successful around the province. Her enthusiasm was infectious. 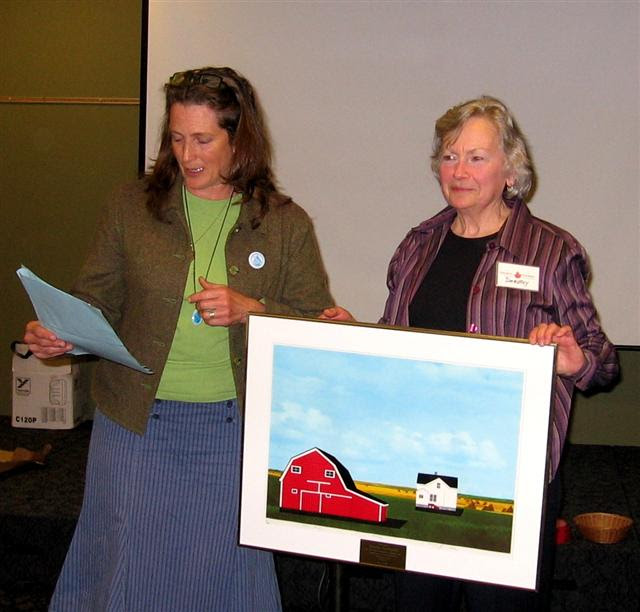 Of special note in the evening, an Outstanding Achievement Award was given for the first time. This was presented to Dorothy Clippingdale for spearheading the GVWWC and her two years of ongoing tireless work in this endeavour. Janet Grey (left in the photo), a long time member of the C of C and hard working volunteer with the Greater Victoria Water Watch Coalition, presented Dorothy with her award. Dorothy was the co-founder of the coalition and has worked tirelessly to make it the success it is here on Vancouver Island for the last two years. For the first time since we have known her, she was rendered speechless as she received this surprise award, which consisted of a plaque and a print.

Board meetings are open to the public and are held on the fourth Wednesday of each month (except December) at 7:00-9:00 p.m. at 2994 Douglas Street (BCGEU bldg).

You can meet our volunteers and pick up important information at our table at the Moss Street Market every other Saturday, 10:00 a.m. to 2:00 p.m., throughout the summer.

Posted by London Council of Canadians at 3:56 PM No comments:

'The Yes Men' video documentary was greatly appreciated and applauded.

The coffee and the friendly co-mingling was also a hit.

The Coffee Night committee will now consider it's presentation options for September and October.

We hope to see you all again soon!

You are welcome to add a comment to this blog, especially if you saw the film and have an opinion on it and would like to share it with others. (To see all of the comments so far, click on the title of this blog.)

Note also the relationship between this film and our newest project, Snakes in the Grass (snakesinthegrass.net), the first action of which is described in the previous blog.
Posted by London Council of Canadians at 2:13 PM 1 comment:

Snakes in the Grass First Action! 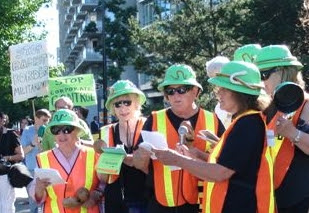 SIG just completed its first action, a protest against the trade and security "public private partnership" (P3) called the Pacific Northwest Economic Region (PNWER) Summit in Vancouver, Sunday July 20 and Monday July 21. The purpose of this action was twofold: to educate the public about the real agenda of this P3 and its participants and its undermining and bypassing democracy; and to confront the summit attendees and make it known to them that SIG will do everything it can to place their nefarious activities in the public spotlight.

For a video of the interviews, songs and talks before the noisy part of our protest, click here. 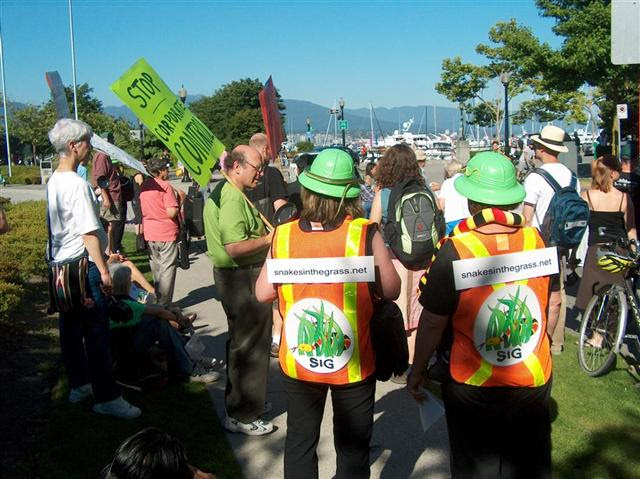 Our SIG action in Vancouver on Sunday July 20 and Monday July 21 went well. We leafleted all over the place, including the 9 a.m. Sunday ferry to Tsawwassen, street corners, at the protest, on the Bayshore sea walk, and so on (all while wearing our SIG outfits, which consisted of black outfits under safety vests with our logo and web site on the backs and green pith helmets covered with rubber snakes). We sang our songs in many different places. We demonstrated LOUDLY with other groups (Sunday evening) outside the hotel where the PNWER Summit was taking place (a small crowd with a strong voice and lots of noise making). We sang our songs outside the hotel the next morning. After a day of leafleting and singing around the city, including at the art gallery, we took the 3 pm Monday ferry back to Swartz Bay. We attracted lots of attention, including radio, TV, and print media, filming, recording and interviewing! 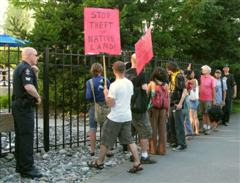 The several RCMP officers at the hotel protest showed great restraint, even when the younger activists pummeled the back iron fence with pots (and they did damage it, according to the hotel managers). One of the younger protesters was detained, but only for a while (during the height of the protest, of course…), and rumour had it that he was already well known to the RCMP. Nobody stopped us from doing our thing until, on the ferry going back, one of the crew said we could not distribute our handbills because we did not obtain prior permission from BC Ferries. So we just walked around all of the decks wearing our outfits advertising our web site. If anyone was curious who we were, we could just tell them verbally what we were up to and refer them to the web site.

All in all, it was a very successful maiden voyage of Snakes in the Grass!

You are welcome to add a comment to this blog, especially if you have an opinion about Snakes in the Grass as a new project of the Council of Canadians. In addition, you can also register your opinion by taking the poll on our web site (victoriacouncilofcanadians.ca).

Posted by London Council of Canadians at 8:01 PM No comments: