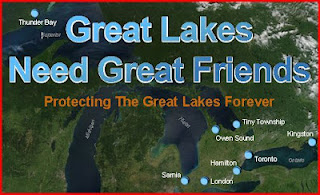 With a patchwork of limited government protection that is hampered by inadequate funding and differing political priorities, the Lakes urgently need people to join together to forge a new future for them, one that will ensure the Lakes will thrive for generations to come. To help forge links and build relationships in communities surrounding the Great Lakes' waters, the Council of Canadians has launched the "Great Lakes Need Great Friends" tour.


Doors open 6:30 Event 7:00-9:00
Maude Barlow The Great Lakes Needs Great Friends Tour.
How many of us went to camps on Georgian Bay or summer at the cottage?  Don't we all love taking the family to the beach for a refreshing swim on those hot summer days.  It is time we begin to bring our Great Lakes back into focus to ensure that our children and grand children have the chance to make some of their own memories about this world treasure.
Come join the conversation as the Council of Canadians and the Aeolian Hall present a special evening with Maude Barlow and the Great lakes Needs Great Friends Tour.
Also speaking, Great Friends
Thom McClenaghan President, Friends of the Coves Subwatershed.
Patrick Donnelly, Urban Watershed Program Manager City of London
along with displays from partners in watershed protection in London.
Location:  Aeolian Hall
For more information contact Gary Brown GPBrown@Rogers.com
Admission is free and donations are welcome.
There will be a special performance by the children’s choir El Sistema London from 6:30 to 7:00 http://www.aeolianhall.ca/el-sistema-aeolian
http://www.aeolianhall.ca/events/great-lakes-need-great-friends
http://www.canadians.org/water/issues/Great_Lakes/index.html

Posted by London Council of Canadians at 11:39 PM No comments: “The Ontario budget will result in harsh
cuts to local health care services. After
years of corporate tax cuts and tax
giveaways for the wealthy, the Ontario
government is now trying to resolve the
deficit on the backs of the sick and
elderly.
We already have a severe shortage of
hospital beds and unprecedented
hospital overcrowding. There are more
than 30,000 people on wait
lists for long-term care homes.
We also have a privatized home
care system that fails to meet
the basic needs of Ontarians.
Yet more cuts are on the way.
It is urgent that ordinary Ontarians from across
this province stand up to protect universal and
fair access to public non-profit health care for
all people in need.”
-- Natalie Mehra, Director of the Ontario Health Coalition
Posted by London Council of Canadians at 8:42 PM No comments:

Letter from Maude Barlow to London City Council re CETA
Posted by London Council of Canadians at 11:04 AM No comments:

"The Harper Government's lack of respect for the democratic process is once again glaringly evident in the current sudden tour by 18 ministers across Canada to promote the Canada European Trade Agreement after keeping details from the public," states Patti Dalton, President London and District Labour Council. "This is a blatant public relations attempt to avoid the massive criticism from labour and social organizations all over Canada which have challenged the Government to come clean on the dangers of this trade deal which threatens the rights of municipalities to make decisions based on the best results for local communities. Speaking at us is not speaking with us and if Minister Lisa Raitt really wanted our input she would have had a townhall meeting not this sham of democracy."

Municipal governments have been outspoken about the lack of transparency in the CETA negotiations. Nearly 60 cities, towns and school boards have called for more information on the negotiations and an authentic democratic process regarding the input of Canadians. Several municipalities have asked for exemption from CETA in order to protect their democratic rights to set social policy and spending priorities without the unfair interference of corporate challenges. "I've never seen municipalities mobilize and unite together in Ontario like they have against the CETA," says Chris MacDonald Ontario Director for the Canadian Labour Congress. "I think that federal politicians need to respect the will of municipalities to make critical decisions for their local communities and this will be undermined if CETA is implemented in Canada."

Economist Jim Stanford has warned that CETA will result in jobs losses and CAW Local 27 President Tim Carrie states that: "CETA is another example of a trade policy that will weaken the Canadian economy and our autonomy." The reality is that Canada's trade deficit will grow under CETA and this was acknowledged in the Federal EU assessment.

Additionally, it is unacceptable that while the EU is protecting its municipally delivered services including water, Canada is not doing so. "So why is the Harper Government engaging in this sudden attempt to defend a losing proposition for Canadians that threatens our sovereignty and vital decision making ability?" comments Patti Dalton. "It appears that they are realizing that labour and social organizations like the Council of Canadians are alerting citizens and communities to the dangers of CETA and the Government is making a pathetic attempt to sell a lose-lose deal to Canadians. We've seen the devastating effects of previous trade agreements so lets make sure this next and more extreme deal is stopped dead in its tracks--as it should be."

Special May 2012 Newsletter from Don Mcleod

On Tuesday May 1, City of London Council will be discussing a full opting out of CETA. Please join us at City Hall 300 Dufferin Street at 4:30pm in Council Chamber Public Gallery Floor 3.

On Monday April 30 & Tuesday May1, Please take the time to email or contact your City of London Councilor and Mayor Joe Fontana.

Of note – I wonder how Councilor Paul Van Meerbergen will address the CETA discussion and vote, as he was the host of the Government’s visit to London on Friday April 27, hosting them at his workplace Lampko Tools. He quite clearly stated that his company was dependant on CETA for improving their access to the European Union, which puts him in a “conflict of interest” on CETA with his role as Ward 10 Councilor!

Please note “London Chapter Council of Canadians” in “a” & “b”
Our hope is that documents in the Council Agenda will include Maude’s letter – Please see attached – Please use this as a reference when you talk to & email the Mayor and Councilors – they all have a copy!

Thank you to our Stop CETA Committee for their diligent work on the CETA issue!

Onward!
Don McLeod
Posted by London Council of Canadians at 10:43 AM No comments: