London RALLY on the Eve of the CETA Ceremony!

We Stand on Guard for Canadian Cities!

No to CETA!
No to Investor-State!
And a Big Yes to Fair Trade!

On Thursday, Sept. 25, 2014, at 4:30 pm, outside London City Hall, you are invited to take a stand for Canadian cities. Together we will mark the historic resistance to the CETA trade pact by city councils from Victoria to Thunder Bay to Toronto. These municipal governments, along with dozens of others, including London, represent the first ever cross-country resistance to a corporate trade pact. The CETA gives corporations the right to directly sue governments if new laws or regulations impact their profits. It also removes the right of municipalities to govern local assets publicly, in favour of privatization and foreign corporate management.

Together we will acknowledge London city council, which passed two resolutions to be excluded from the CETA, for which it has received no reply from either the federal or provincial governments. This gathering will also bear witness to the official announcement, on Friday, Sept. 26th in Ottawa, that negotiations for the Canada-EU Comprehensive Economic and Trade Agreement are complete. In reality, while the agreement is nearing completion, the CETA still needs to be ratified, a process which could take up to two years.

Following the announcement, the CETA cannot be changed. But it can be rejected!

Come together, connect, and thank Canadian city councillors for standing up to protect families and democratic process.

Bring your voices, ears for listening, and determination for democracy. Stand tall together, knowing we are on the right side of history. No to CETA and Investor State! Yes to Fair Trade! 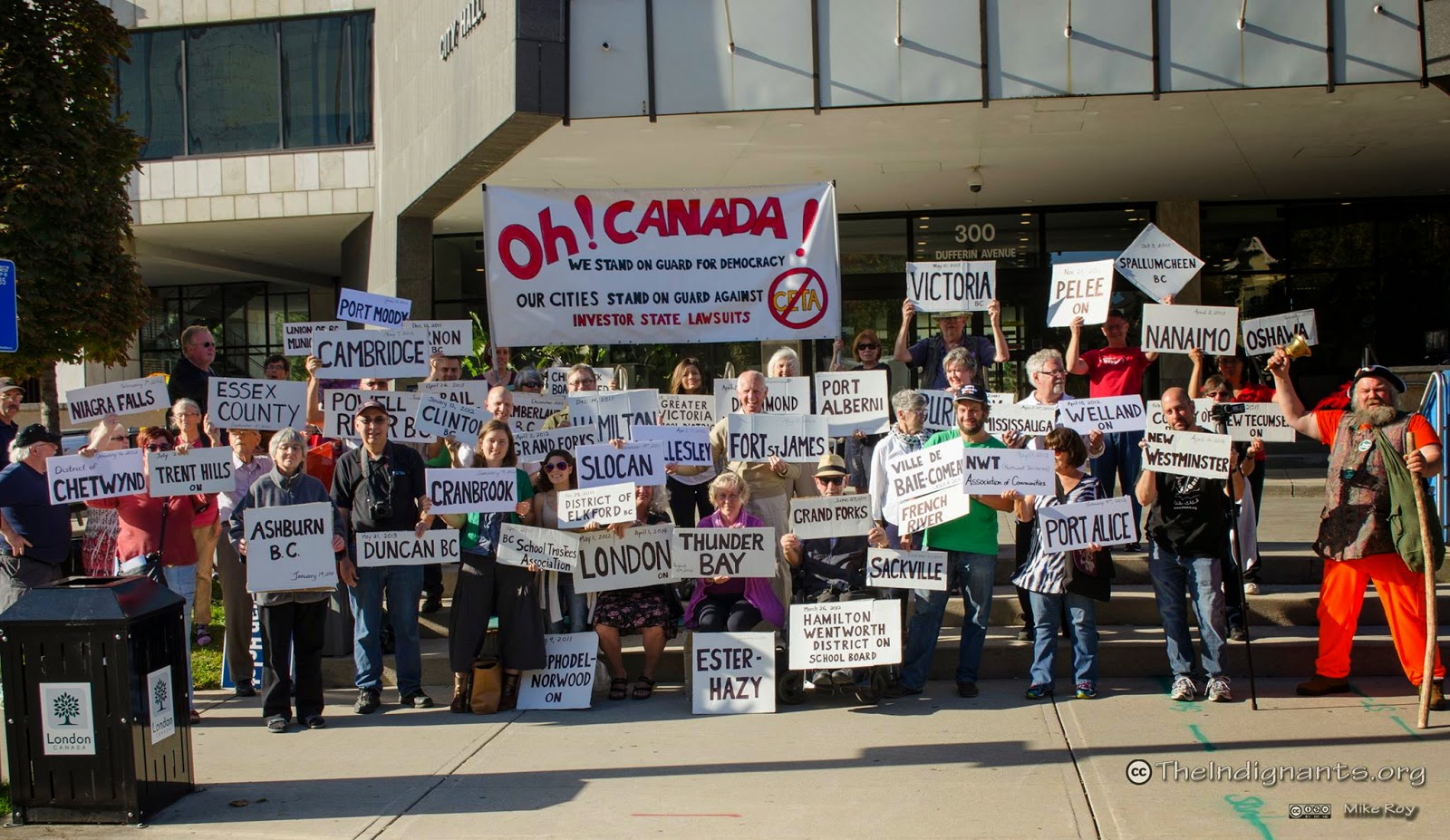 Posted by London Council of Canadians at 2:39 PM No comments: 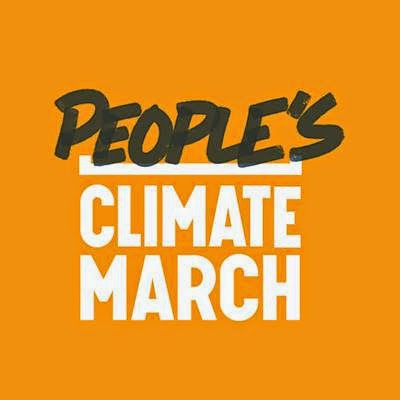 On Sunday, September 21, 2014, 1:30 pm at the Jet d'Eau Fountain at the Forks of the Thames, London will march in solidarity with hundreds of thousands of deeply concerned human beings around the planet to say NO to runaway climate change. The People's March in New York City expects over 100,000 people with 496 buses coming from nearly all 50 states and Canada. Those who cannot get to New York City are marching in their own cities. London will join 125 other cities in Canada, including Peterborough, Brampton, Barrie, Owen Sound, Oshawa, Belleville, Sudbury, Toronto, Burlington, Guelph, Stratford, Waterloo, Kitchener, Hamilton, St. Catherine, and Niagara on the Lake for this historic moment in history.

Canadians who are angry with our government for escalating climate change and have a different vision for Canada are encouraged to speak to the crowd. The renown Line 9 Snake, which made its debut in Queens Park last spring to protest the National Energy Board approval of the reversal of the 40 year old Line 9, will be walked around downtown as marchers carry signs denouncing the continued use of fossil fuels. The march will end at the Peace Garden in time for the dedication ceremony of the new Peace Plaque. This is a fitting terminus for the People's Climate March, since escalating climate change is a serious threat to world peace. Rising sea levels, deserts where people once farmed, and lack of drinking water will all lead to wars over scarce resources.

Anyone with a troubled conscience about Canada's contribution to climate change is invited to add their numbers to this historic event and join us at the Forks.


IN SOLIDARITY WITH THE NEW YORK MARCH

1:30 PM AT FORKS OF THE THAMES
(next to the bridge at the water cannon off Riverside Dr.)

ANYONE CAN SPEAK (briefly)
YOUR OWN WORDS OR QUOTES

WE WILL END THE MARCH AT THE PEACE GARDEN FOR THE REDEDICATION OF THE PEACE PLAQUE at 2:45 pm

Please go to watchdisruption.com. It is a 51 minute film that will help you understand the crucial fight against Climate change. 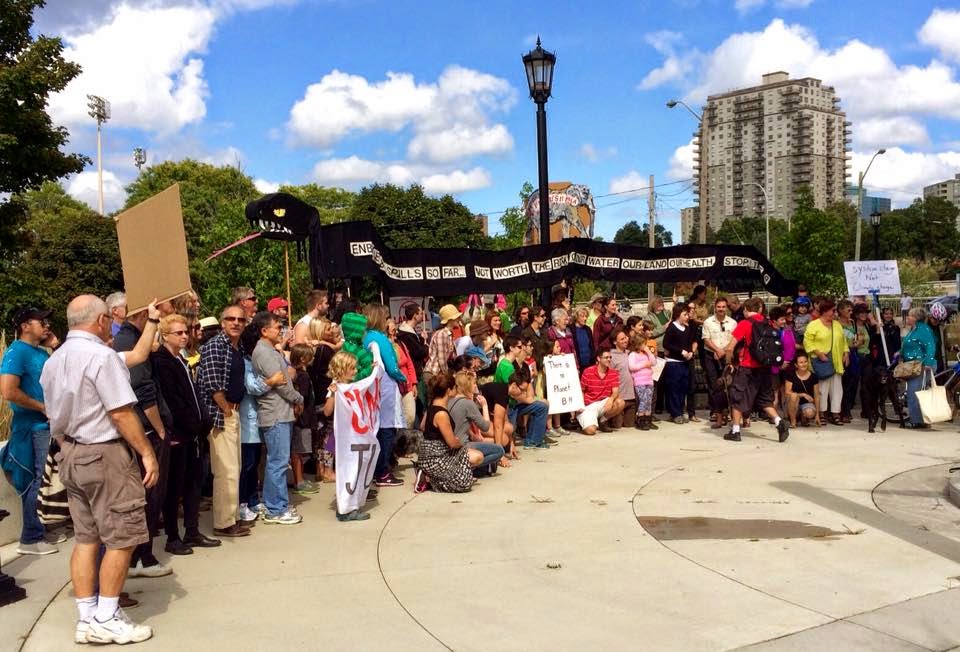 Posted by London Council of Canadians at 6:07 PM No comments:

The September Monthly Meeting of the London Chapter of the Council of Canadians starts at 6:00 pm; the film starts at 7:30 pm.

All are welcome! Free! Refreshments! 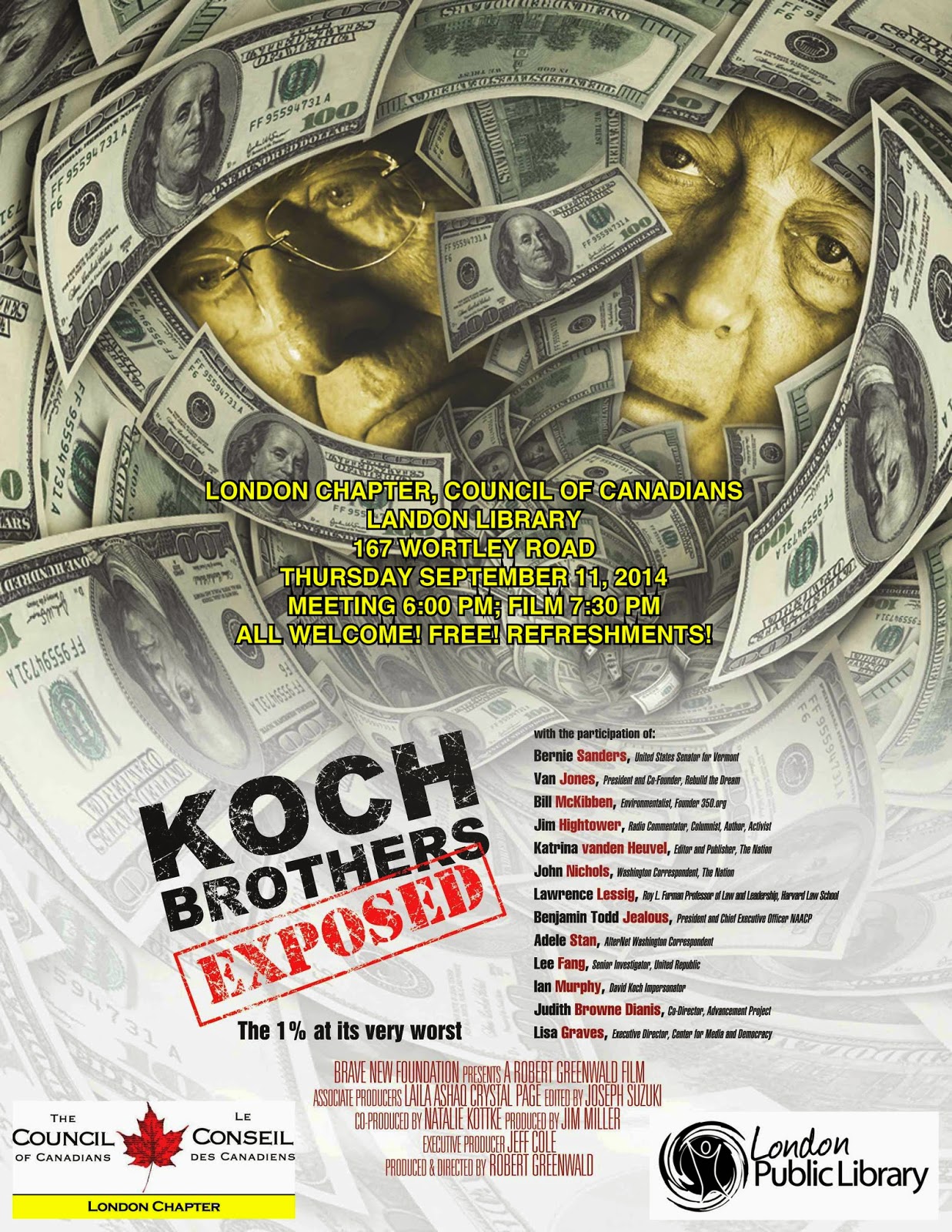 Posted by London Council of Canadians at 6:08 PM No comments:

Packed house at our screening of We Are Wisconsin last night! Cinema Politica London lives!...and rocks! Not a dry eye in the room! A special bonus was in person commentary from a WAW veteran, Sarah Roberts (now a Western University professor), after the film.

http://www.cinemapolitica.org/screening/london/living-downstream
Posted by London Council of Canadians at 1:09 PM No comments:

Cinema Politica London is happy to be back under new management after a two year hiatus! It is now being run by the Solidarity Film Coalition, a committee of the London Chapter of the Council of Canadians. Co-sponsors include L.A.C.A.S.A. (Latin American Canadian Solidarity Association), the London Public Library, and Seeds of Hope. Our kick-off film is, appropriately, "We Are Wisconsin", a rousing cheer leading inspiration to action for grassroots movements! It is guaranteed to knock your socks off!

All of our showings are free of charge, but we do welcome donations any time. 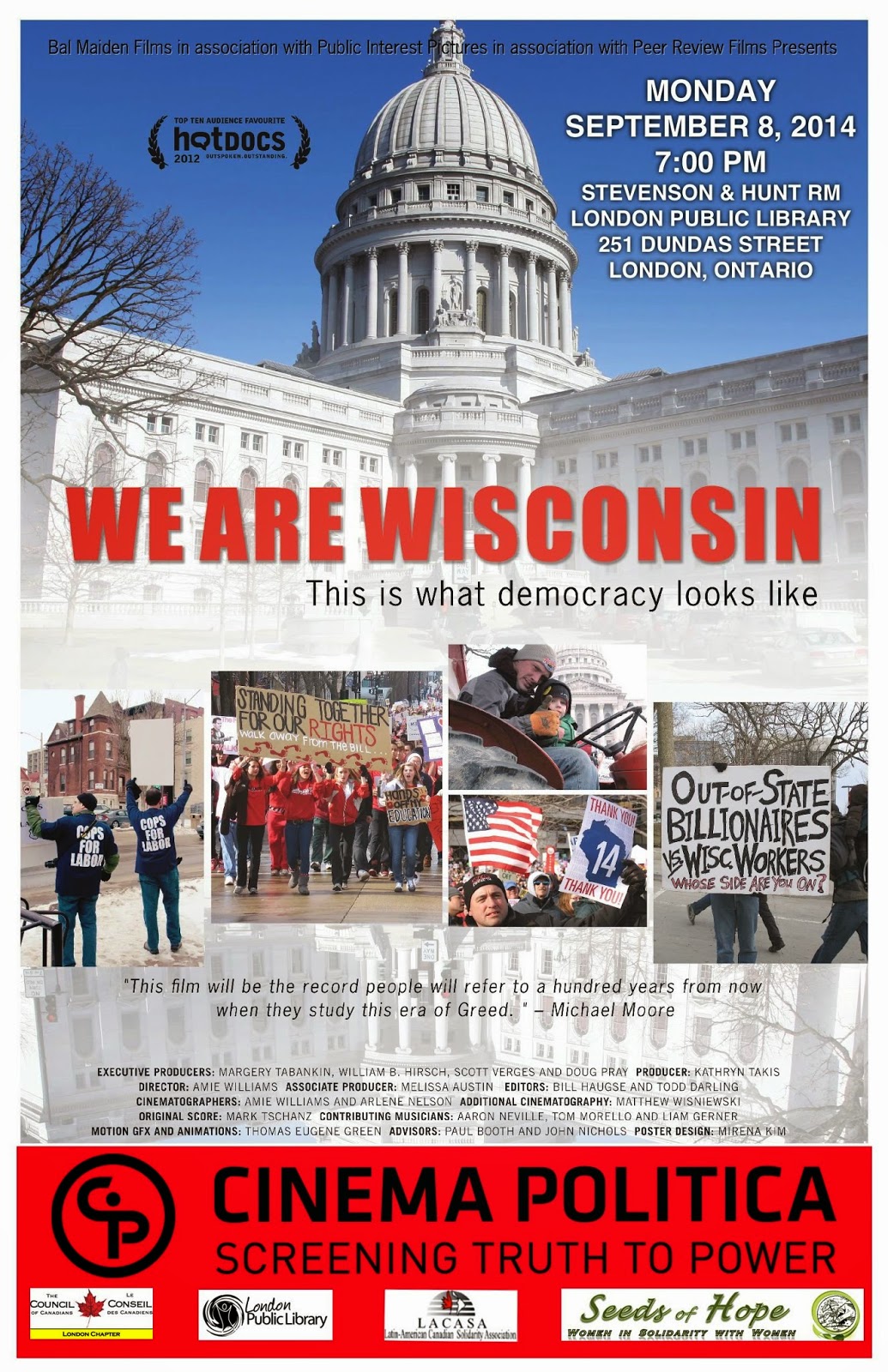 Posted by London Council of Canadians at 3:12 PM No comments:

Trade with the New Generations in Mind

I am fascinated by new generation trade pacts, described as the transfer of power from people to transnational corporations.* I find the topic both compelling and repelling. Despite the discomfort, the study of trade offers essential understanding for those interested in preserving natural life and community infrastructure from nation to nation.

Years ago, my undergraduate professors startled me with the news that “new generation” trade deals give large corporations the opportunity to manage the public’s assets, and also to sue countries when public laws decrease corporate profits. Should we not ask for more in our global policy? Because if profit of the largest entities is the prime intention, than that is simply what we will get, and all the environmental and geo-political instabilities associated with that. When setting regulations between countries can we ensure resource security, vital public services, and the greater political security that comes with that?

Trade deals are written in private. What if the best in us was put forward for their composition. What if the wisest elder, with a great sense of humour, soft heart, and economic knowledge sat at the table to negotiate? Why not seek robust economy based in real jobs and environmental security?

Such global-impact regulations should be approached with loving-kindness. For no child in the so-called Global North will be secure in an insecure world and no child in the Global South, with all its restriction of access to clean water and basic human rights, will be fully nourished. We could take less in the North in exchange for greater security.

We can do better than an international trade law that allows corporations to sue nations if corporate profits decrease over the use of public laws.

People are awakening to what is truly valuable. When I think of the people in my city I see so many whose primary desire is security for families, friends and community. This is a reason to learn about trade pacts.

As a North American, the place of birth of the “New Generation” deal, I feel a responsibility to be part of general dialogue to create fairer trade. I am curious about global law after the new generation pact and what else is possible!

This blog is a creative space for exploring New Generation trade from a different perspective, one that is truly generational and focussed on what we are offering children and their children to come. In peace and faith!

*trade pact description from Maude Barlow, Chair of the Council of Canadians

Published originally on  August 30, 2014 in http://newgenerationtrade.com/2014/08/30/trade-with-the-new-generations-in-mind/
Posted by London Council of Canadians at 6:27 PM No comments: