Bar Codes: Know Where Your Products and Food Come From

BUY USA & CANADIAN MADE by watching for "0" at the beginning of the number.

Remember that distributor country may be different from where the product was made.

Posted by London Council of Canadians at 9:40 AM No comments:

The end of June sees another calendar year tick by for the Council of Canadians. 26 years of advocating for the rights and needs of all Canadians!

Having worked on our Chapter History over the past year, we too passed a significant milestone of 11 years. We are still waiting for more feedback to complete our Chapter's history. If you have any key dates, event stories, people/places or photos we would appreciate hearing from you.

An upcoming important date to mark on your calendars is Monday November 14, 2011 when the London Chapter will be hosting our Annual General Meeting to celebrate the successes of the past 11 years. Our keynote speaker for our AGM is Glen Pearson, Executive Director of the London Food Bank widely known as the Liberal MP for London North Centre who gave Parliament a vibrant example of decency and honesty in politics.

Our London Chapter will be taking to the streets this summer in support of Car Free Weekends in Downtown London. Look for us under the blue canopy of our new London Chapter exhibit display tent.

June is "sign up a new member month" Please ask us for a Membership application form through email at: info@londoncouncilofcanadians.ca or sign up on the Council of Canadians web site: www.canadians.org Please make sure that you fill in the London Chapter as your home Chapter. We need your support to help give Canadians a voice on important issues.

Let's get all 1800 members that are affiliated with our London Chapter out to events in the coming year!

See you on Dundas Street this summer - starting June 18/19!!

Posted by London Council of Canadians at 9:19 AM No comments:

Posted by London Council of Canadians at 5:50 PM No comments: 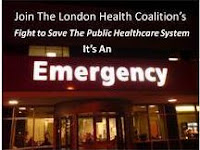 We are writing to express our deep concern about the “Commission on Broader Public Service Reform” announced in the provincial budget in April. According to the initial announcement, the Commission has been struck to review all of Ontario’s public services. Our concerns are threefold:

Premier McGuinty, this Commission should be disbanded. If your government is seeking ideas for improving public services and reducing waste, such a project must thoughtful and balanced. Principles that reflect the values and priorities of Ontarians should guide the process and frame the options considered. These principles should include cornerstone public values of equity and accessibility. The leader of the Commission should be seen to embody these values, not to act as a pundit for the private interests of Ontario’s financial and insurance sectors. In fact, Don Drummond actually argued against principles of accessibility, universality and equity in his paper on health care commissioned by the Ministry of Health released last autumn.

Furthermore, any process to generate ideas and recommendations for reform should be democratic and engage the expertise and experiences of citizens and public servants. So-called evidence on international experiments with public sector reform should be subject to open discussion to test the validity of the claims. The issues at stake are serious and the public assets at threat of privatization are significant. These decisions about the future ownership and control could be difficult if not impossible to reverse. They should not be entrusted to a biased process.

In a Globe and Mail interview published shortly after the budget was released, Don Drummond is quoted as stating that despite the restrictions announced by the Finance Minister, his was willing, to look at “almost anything”, including health care and education:

in other words, a publicly funded system – “people are much less troubled right now by

Lest you believe that this is simply an objective observation, in a Toronto Star Opinion Piece in February, Drummond made this same assertion about health care privatization and called it “good news”. He reiterated this pro-privatization rhetoric in recent speeches at Queen’s University and in Ottawa. All this, despite evidence that profit-driven clinics have engaged in promoting user fees and extra billing of patients, undermining single-tier Medicare and violating the Canada Health Act.

In fact, Mr. Drummond co-wrote the TD Economics’ report on health care commissioned by the Ministry of Health last year, in which the authors recommended that your government “throw the door open” to the privatization of health care delivery systems and experimentation with two‐tier health care (see pages 8,9,20 and 23).

In fact, Mr. Drummond and his co-authors criticized the Romanow Commission for putting access to health care at the centre of their study on the future of health care in Canada. Mr. Drummond’s report was ideological and rife with inaccuracies and contradictions. A number of recommendations were made without any supporting evidence whatsoever. We have provided you with our analysis of that report last fall and we enclose it here again. (a link is here: http://www.web.net/~ohc/healthspendingreportsep2010.pdf )

Posted by London Council of Canadians at 10:57 AM No comments: