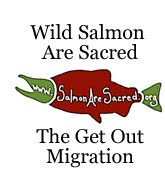 The migration event to Victoria was grassroots awesome. Thousands walked. And walking --they talked in ever changing kaleidoscopic migrating citizen knots pooling in back-eddies to surge across intersections 400 a time --unmarshalled.

Schools of bright painted cardboard salmon on sticks jumping and twirling over the throng seething --dancing with salmon, the drumbeat, the music enjoining onlookers to feel the wild salmon imperative -our migration. Pied-pipered we follow not a street, not a direction but a calling, a need, a compelling attraction towards vitality, towards renewal.

Through the canyon of downtown buildings, we feel a quickening intensify. The salmon inside me feels --destination, attracting, animating, joyfully moving me us blurring and like magnetized marionettes pulled towards not place, but purpose and exhilaration.

Gathering in number, cascading, almost mindful bits of reminiscence, a place resolves itself to become a purpose and then to breathe-in, inspiration to become motivation to see and then to shout we are here --arrived to feed and nurture this place, so that it will remember us too as we remember it.

We have a sense of useful selfless joy being in and with our noble kind. I, we are not supplicants at the legislature. We are mobile thoughtful food sharing its values and inspiration with all who eat of us. Are we not wild salmon migrating now? Are we not returning to our waters our land and our fellow beings with sustenance?

More than four thousand* of us became the wisdom and voice, of wild salmon yesterday. If you hear this voice then you are too. 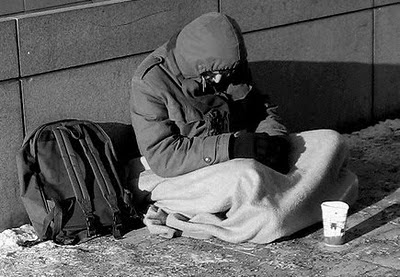 As we head toward our panel discussion on “the poverty industry” at our AGM on May 17, we would do well to recall that the Council of Canadians was founded 25 years ago to counter the free trade, deep integration policies of the Reagan and Mulroney administrations.

The crushing poverty and homelessness that we have today are the direct result of the rise of globalization and its underlying economic philosophy of "neoliberal" “trickle down” wealth. The idea is that by the rich accumulating huge fortunes from exploitation of those who are now referred to as the “working poor”, smaller amounts of this money will eventually infuse all of society with a healthy glow. This fundamentally flawed foundation of “neo-conservatism”, which has been parodied as “tinkle down economics”, simply results in an acceleration of what has always been true in capitalist economies: the rich get richer, and the poor get poorer.

This situation has now become so entrenched that even more progressive governments such as the Obama administration in the U.S. cannot escape its grasp, even though Obama campaigned on the promise of a “renegotiation” of NAFTA.

The Council of Canadians will not rest until the wrongs of free trade and its resulting increase in poverty have been righted.

Robert Cory
Posted by London Council of Canadians at 12:21 PM No comments: