The Brave New World of Climate Change and Trade

It’s no secret that the purpose of free trade is to send services and goods around the globe without restriction. What most don’t know is that restrictions are increasingly denied for things we want like environmental, health and job protections. When market access for corporations is restricted for these reasons or to simply carve out a little bit of love for the local economy, it’s deemed a bad thing. The legalese labels this “discriminatory”. Favouring local jobs, goods, and services is in fact illegal in the wild world of trade because local sourcing can cause expropriation of a global corporation’s anticipated profit “assets”. Countries are not just given a verbal reprimand. New generation trade allows profit seekers to wield lawsuits in special courts against protective laws. Corporations can sue nations because they are using laws to protect the public in trade courts. Even more shocking, we cannot sue back. It’s a one way process called Investor State Dispute Settlement (ISDS). This system transfers the power of law from nation states to investors. It is appropriately called Investor State for short.

On Sunday past, the National TPP Team with MoveOn.org organized a trade webinar featuring Canadian author Naomi Klein about the TPP (the Trans Pacific Partnership ~ see Trade Justice Dictionary), other new generation deals, and climate change. Klein summarized the intimate relationship between climate change and this style of international policy and gave examples of how free trade has supported the traditional energy giants. She shared how Lone Pine corporation is suing Canada for 230 million under NAFTA because of Quebec’s fracking moratorium. Doing what governments are employed to do, Quebec passed a temporary ban on fracking while researching impacts to people and water in the St. Lawrence region. NAFTA, which heavily features free market energy transfers, opened the doors to Investor State trade lawsuits about energy production.

In this time of serious environmental challenges, we need to be able to build our local economies and to source green energies without threat of lawsuit. One direction lawsuits from corporations to countries for loss of profits cannot create the right climate for humanity’s dilemma. On a planet with dangerously high emissions, we need to also invest substantially in the local economy to bring balance back. We need to have law on our side. May we begin to seriously care for our futures and our children’s by enacting policy that promotes climate security.

Originally published in:
http://newgenerationtrade.com/2015/01/14/climate-change-and-trade-deals-with-naomi-klein/
Posted by London Council of Canadians at 4:22 PM No comments:

In the last couple years I came across a phrase in trade talk being whispered behind our backs. “Pulling a Canada.” Peculiar. Nothing like the Canadian self-image of champion – in hockey, coffee and geographic beauty. Reading the Canadian Centre for Policy Alternatives (CCPA) January 2015 report, I think I understand what the chiding is about.

The lawsuits. Did you know that through trade agreements countries are being sued for having policies that diminish the profits of corporations? Investor State Dispute Settlement (ISDS) is what this beast is called. In secret trade courts a corporation sues to have a policy removed. Corporations are given special rights beyond citizens to use trade constructs such as Most Favoured Nation or National Treatment (see Trade Justice Dictionary) any time they feel anticipated profits may be shrunk by health, labour, environmental or local laws. There is no mechanism for countries to sue back. Trade-legal outcomes supersede national laws and force changes in policy or risk further payment of hefty fines. Taxpayer money pays them out. ISDS – with its easily forgettable acronym sounds irrelevant. Of course, it isn’t. It’s as intimate a thing as the rules you set in your household and the budget you draft in your bank. Its influence enormous from the wide lens though subtle to see at first. The impact felt not only by your family. Multiply it by the wallets of all the families in your country. That’s the power of a trade deal.

From environmental protections to health care costs, Canadians have been charged with more lawsuits than any other developed nation. The CCPA report summarizes so far under NAFTA, Canada has been the target of 45% of NAFTA’s investor state lawsuits within the three signatory nations. Here is the score: Canada — 35, Mexico — 22, and the US — 20. In terms of payment, the US has not yet lost a case. Canada has lost six paying out 170 million so far. Mexico has paid for five at a cost of 210 million.

Canada has paid Investor State fines to gasoline, paper, and oil companies but we have never had so many transnational companies suing us as we do right now. If all the present cases were to pass in trade courts, Canadian taxpayers would have to pay out over six billion dollars according to the CCPA report.

We could become the biggest loser on the globe.

The rules of the game are clearly wrong. It’s absurd to defend hard-earned laws against the risk they pose to profits of large corporations hosted in the lands of our trading partners. (The people who work diligently day to day in the ground offices of these corporations are neither told nor consulted.) With this emerging international system that behaves like its the law, we are changing the very standards of our lives far into the future.

Is it accurate to frame trade as a game? If we do, it might be more appropriate to call it Russian Roulette with our children’s futures. Those with the biggest guns, tend to win. With serious issues facing Canadians and our brothers and sisters across this globe, it’s time to look deeply at what our country is doing with the collective budgets of all our houses.

Originally published in
http://newgenerationtrade.com/2015/01/22/pulling-a-canada/
Posted by London Council of Canadians at 3:55 PM No comments: 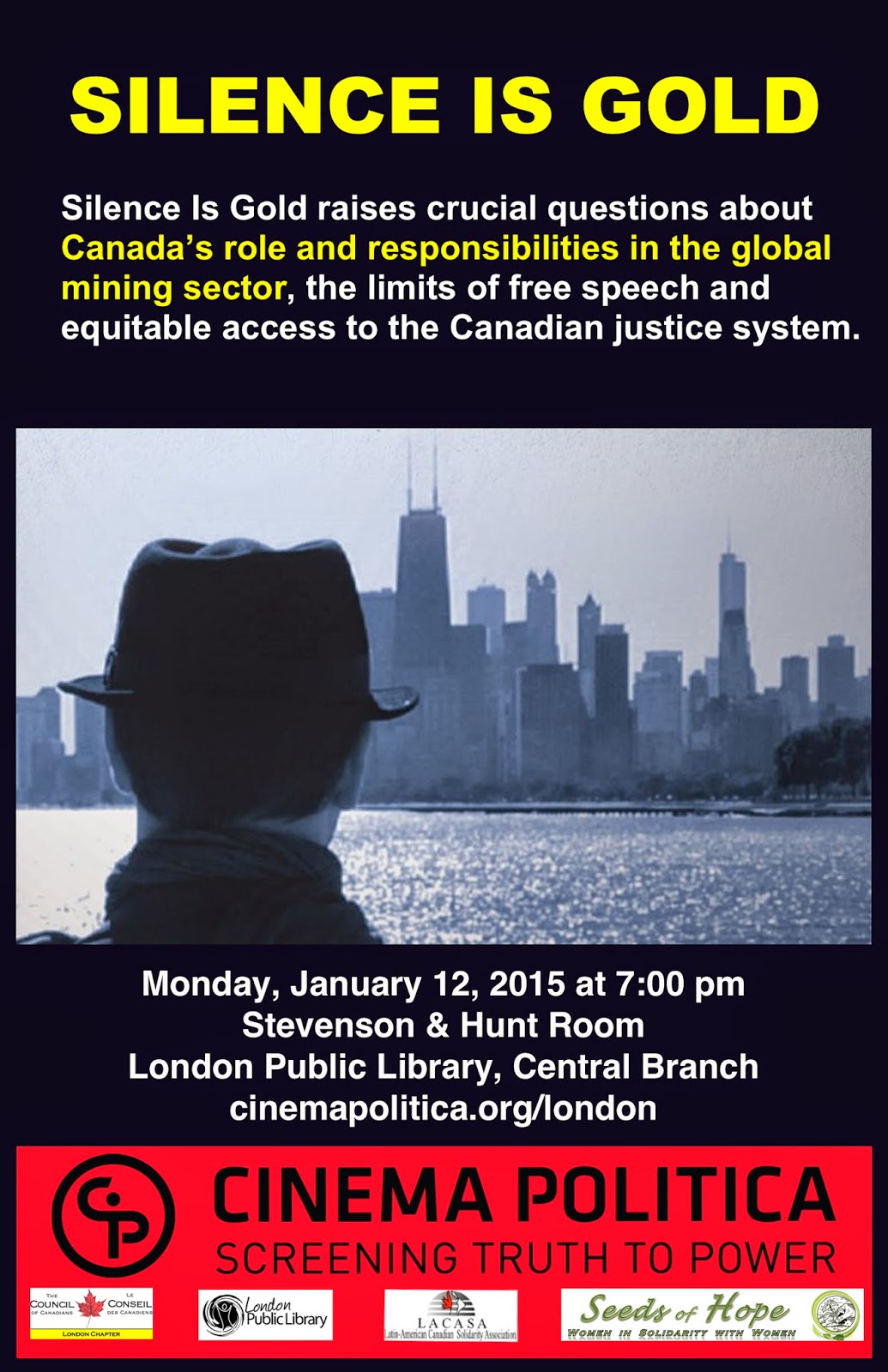 After introductory remarks, the film will start at 7:00 sharp.

Late comers please enter through the door at the back of the room.

Everyone is welcome!
This is a FREE event offered by Cinema Politica in parternership with the London Public Library.

FRAGRANCE FREE EVENT! Please be respectful of attendees who have serious allergies!

After Alain Deneault wrote an exposé of corruption and crime in Africa called Noir Canada, he and his publisher were threatened with a defamation suit by the world’s largest gold mining firm, the Canadian company Barrick Gold. Despite the threat, they still believed public debate was possible, so they decided to proceed with publication. Deneault and his collaborators soon found themselves mired in a legal hell that showed them what 21st-century censorship is all about. For four years, Julien Fréchette patiently followed all the twists and turns of the Noir Canada affair and the debate over strategic lawsuits against public participation (SLAPPs). This gripping legal thriller sheds light on major issues of concern to us all. (NFB Canada)

In conjunction with the London Public Library (londonpubliclibrary.ca), Cinema Politica London (cinemapolitica.org/london) presents the documentary film Silence is Gold, about one of Canada’s largest mining companies attempt to silence an exposé of Canadian mining practices in Africa.

In 2008 Alain Deneault co-wrote Noir Canada: Pillage, corruption et criminalité, a book highly critical of the Canadian mining industry in Africa. Prior its launch, Noir Canada publishers Les Éditions Écosociété Inc. received a letter from Canadian gold mining giant Barrick Gold, threatening legal action for alleged false information and libel. The launch was postponed but not before Écosociété had distributed nearly 2,000 copies of the book. Barrick then filed a libel suit for $6 million against the writers and the publisher.

The case is considered by many to be a prime example of a “strategic lawsuit against public participation”(SLAPP). In 2011 the Quebec Superior Court ruled that "Barrick seems to be trying to intimidate authors", that the suit was "seemingly abusive", and that Barrick must pay the authors and publisher $143,000 to prepare their defense. Later that year Deneault and his team, exhausted by the court proceedings, reached an out of court settlement with Barrick.

During the process, however, a coalition of activists began to push for anti-SLAPP legislation and in 2009 Quebec adopted an anti-SLAPP bill, a landmark piece of legislation protecting freedom of speech in Québec.

For four years film directorJulien Fréchette followed the proceedings, documenting each legal twist and turn, revealing just how far the Canadian mining industry is willing to go to silence criticism of its mining practices.

Professor Lorraine McNeil admits she is not surprised by Barrick Gold’s tactics: “This is not the first time a Canadian mining company is accused of abusive practices”. In fact, members of the indigenous Mayan Q’eqchi’ from Guatemala have filed three lawsuits in Ontario courts against Canadian mining company HudBay Minerals over the brutal and abusive treatment of several of its members. The abuses are alleged to have been committed by mine company security personnel at HudBay’s former mining project in Guatemala.
http://www.chocversushudbay.com/

Silence is Gold raises crucial questions about the limits of free speech, public debate, equal access to justice, and ultimately, our democratic institutions.

Please join us to watch and discuss this important film, which will be screened on Monday, January 12th, 7 pm, at the Central Library, 251 Dundas Street, London, ON.

Our focus from January through March will be on election issues. The Jan. 8th meeting will feature presentations from LeadNow and from Fair Vote Canada, followed by Q & A with the audience. Bring your election questions for these expert speakers and expect a lively, informative event. Donations are welcome.

6:30 Coffee, tea, snacks (bring something to share) and social

FRAGRANCE FREE EVENT! Please be respectful of attendees who have serious allergies! All are welcome! Free! Refreshments! Donations accepted gratefully!

Leadnow.ca is an independent advocacy organization dedicated to achieving progress through democracy. They bring Canadians together to build a stronger democracy that protects our environment, creates economic opportunity, increases equality, and guarantees universal health care.

1.) Leadnow supporters across Canada had indicated that defeating Harper in 2015 is the highest priority.

2.) Leadnow sent in one of their full time staffers to facilitate a meeting to introduce the Leadnow voting strategy to Londoners on December 8. The meeting was a great success and the rest will be history!

“Fair Vote Canada (FVC) is a grassroots multi-partisan citizens’ campaign for voting system reform. We promote the introduction of an element of proportional representation into elections for all levels of government and throughout civil society.”

As a local representative for Fair Vote Canada, German Gutierrez-Sanin will be speaking on proportional representation. German is a journalist; a member of the Inter-American Press Association; a Professor at Fanshawe College – School of Language and Liberal Studies; a social activist and former NDP candidate in the Riding of London North Centre for the 2011 Federal Election. He currently sits as a member of the Central Council of the London and Middlesex Local Immigration Partnership (LMLIP) of which he has been a member since its creation in 2010.

Minutes of our last monthly business meeting:
http://londoncouncilofcanadians.ca/LondonCoCMeetingMinutes.pdf
(Our last monthly meeting on Nov. 6 had no business component. Our AGM was held on Nov. 28.)

Posted by London Council of Canadians at 11:42 AM No comments: